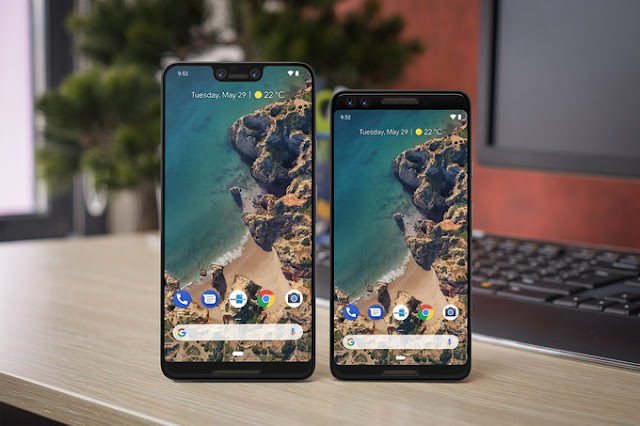 Google announces the newest version of the Pixel 3x and 3XL Pixel Smartphone, Google's pixel smartphone market to excel Apple and Samsung as a flagship smartphone in 2016. Built in Smart Assistant and Great Camera feature pixels 3 and 3 XL smartphones are called 'the most helpful device in life'. Google has announced the launch of two new models of smartphones, tablets and home speakers at a ceremony in New York on Tuesday.

This two smartphone looks like Pixel 2 and Pixel 2 XL. Google has used a camera behind these two smartphones. That is, Google did not look at the trend of two or three cameras in the market. The phone has 12 megapixel camera behind. The Pixel 3 smartphone has a 5-inch OLED display and 3 XL's 6.3 inch OLED display. Dual cameras are set up in front of the phone. It has super resolution zoom, night site low-light mode.


Google's new two phones are the Android 9.0 Pie-powered first smartphone. It offers Qualcomm's Snapdragon 845 chipsets. Apart from this, it has 4 GB RAM and 64 GB of storage. It also provides a different version of the 128 GB storage.

But the difference between the two phones is its screen size and battery. There are 2915 mAh and 3XL 3430 mAh battery in pixel throws. The phone has the first charging facility. Google says, if you charge 15 minutes, the phone can be used for seven hours.

Google's new phone has two IP-68 ratings. That is, it is water and dust-proof. There is a security chip made by Google on the phone titan M, which is claimed to be the safest smartphone built by Google. It has USB C earbuds.

Experts believe that this phones will compete with Apple's iPhone X, XS Max and Samsung's Galaxy S9 and S9 plus


Google Home Hub: Pixel Slate and Pixel 3 Smartphone as well as Google Smart Displays Update announced Google Home. Using Google Assistant software-powered device, you will have the opportunity to use various content including YouTube, Google Search. Its price is $ 149.